After years of saying the new website is coming, I finally found a design that fit FaceWAN. The front of the website has been the same since FaceWAN started back in 2006. I've wanted to put something new up, but being terrible at web design, I could never make anything that was a fit. Some people had thrown me designs over the years, but they just didn't fit after playing around with them in tests. I asked a web designer friend over the last few weeks if he wanted to help me make a mock-up of the new website design and what he gave me was exactly what I've been searching for. It's mobile device friendly and is up to current design standards. I also took the time to change some links and add the Steam Community and Discord links.

I will be working on theming the forums with this design to make it more fluid with the main website now that there is an actual website design, so look forward to seeing that in the next month.

Me and my sexy boy Espeon have been workin' on getting you guys some sweet features and I'm excited to announce them to you!

I have created a plugin that essentially does the following:
Auto bunny hopping is now by default ON.
This means you can consistently and accurately hit a bhop by simply holding your space bar down.
HOWEVER, I have also limited this ability to FOUR (4) hops before you are punished and your velocity returns to ZERO (0.00).

So essentially, once you surpass the running velocity/speed of 260 units every hop you make is counted and once you hit the global default of FOUR hops, you are punished and your speed is essentially nullified.

This not only makes scripts completely useless now but also introduces the ability to finally be able to bunny hop those pesky skill surf maps without anyone needing to turn on the auto bunny hop anymore.
You can also use this to your advantage. If you count your enemies hops and you know his fourth stops him, you can wait for that fourth hop and gun him the fuck down!
---------------------------
The second plugin we've created (mostly thanks to Espeon) is a call admin feature!
Is a player breaking rules, being an ass hat or hacking ?
Is there no big boy admin to deal with that fuck head online ?
Simply type !calladmin or /calladmin (this is better, as its invisible to everyone) and choose the assigned choices and one of us will most likely be on our way ASAP.

Abusing this WILL result in a ban however, so please don't do that.

Thanks and I hope you're all happy with these changes!
(Feedback on discord would be appreciated.)

Hey you bunch of dumbs
I'm writing this up because I want to have a pool party at my house. Bring some pool noodles or whatever

In all seriousness though, I'm writing this to notify you that there will be an ADMINISTRATOR meeting on our discord server THIS SATURDAY at 2pm PST.
If you are unsure what that time is for you then tough shit (google it faggot)

So to SUMMARIZE this shit
Basic/Full/Garbage/SM/Whatever the rank is I want you there if you're able to be.
Discussion will be about general rules and what you should know regarding them as well as the server and its current updates, plugins and what not.
I will also be discussing possible demotions/promotions and so on in regards to current administrators.

You can now sync your user level on the forums in the Discord Server easily without needing to PM a bot and all that jazz. I have created a link application on the website that will do all this in just a few easy steps (if you are logged into the forum already, it's one step.)

For regular users: This gives you access to the &quot;Camp Granada&quot; voice channel, the ability to see message history, create invites, upload files and embed links in chat.

For admins: This gives you all the above, plus gives you access to the admin only channels.

Once you go to the URL, it will check that you are logged into the forums (if not you get directed to login and once complete, you go on to the next part.) If you were already logged in, you go straight to Discord to confirm the link. Once confirmed (and logged into Discord), you are then taken back to a page that confirms you have successfully synced your user level with Discord.

It's been a little while since the last post, and I've been doing a lot of upgrades and things behind the scenes, making sure that FaceWAN runs smooth and the servers are solid. Here are the highlights.

I have posted a request for adding new maps to the CS:GO Surf servers(s) here. I suggest reading this and letting me know what you think.

I just want to clear up why we currently have a subscription you can pay for to get admin, as I've heard some people stating we should just accept admin apps or that its stupid and you only get kids. I do agree with the fact that some people will buy admin just for the power or other things benefiting only them, but there are a fair amount of good admins that stick around and make a difference. Know that anyone buying an admin subscription is watched by the Super Mods and me for signs of abuse (and their usage is tracked in SM.)

The main reason I started admin subscriptions years back was to at least get some money to cover server costs, even if its like 1/4th the total bill every month, its something. I pay for everything out of my own pocket (~$220/mo), and I'd never beg people for money, that's just pathetic. The money from admin subscriptions ends up going right into the server bill each month. I will NEVER put ads on this site or on the servers, because ads are the cancer of the internet and obnoxious as fuck. I think that nobody should ever have to deal with ads for an online service.

That being said, I have thought of getting rid of admin subscriptions and opening admin applications (or have both) at some point, or even selling some Virtual Servers or Game Servers (to friends/trusted members), not sure where I'll go with that yet.

In the last few months, I've moved the game servers to a fresh Linux server running the latest OS with better tools to manage the game servers. This allows the game servers to run smoother and be able to correctly auto-update when a game update hits (no more waiting for me to update.) I have also taken the time to improve the firewall rules and remove anything unnecessary.

The admin panel was completed and made live last month, there has been a separate post about that in the admin forum about it.

Additionally, I'm currently working on a few things for admins in Discord that will allow for easier moderation of the servers outside of just text chat.

Over the past few months, I updated all the old site code (terrible PHP from 2006), and have been working on a new admin panel, which is 90% done. While most of you are thinking &quot;hey, I don't see any of these changes&quot;, it hasn't changed the look of the site yet, but has allowed me to create things like a better admin linker, site templates that can easily be updated, and a nice admin panel (with cool features.) The main website can now get a much needed updated look without having to deal with PHP code, as everything is now in an HTML template. For those that are good at designing website templates and are interested in helping design a new look for the site, reply in this thread.

To give you an idea of what I've been working on, here are some screenshots: 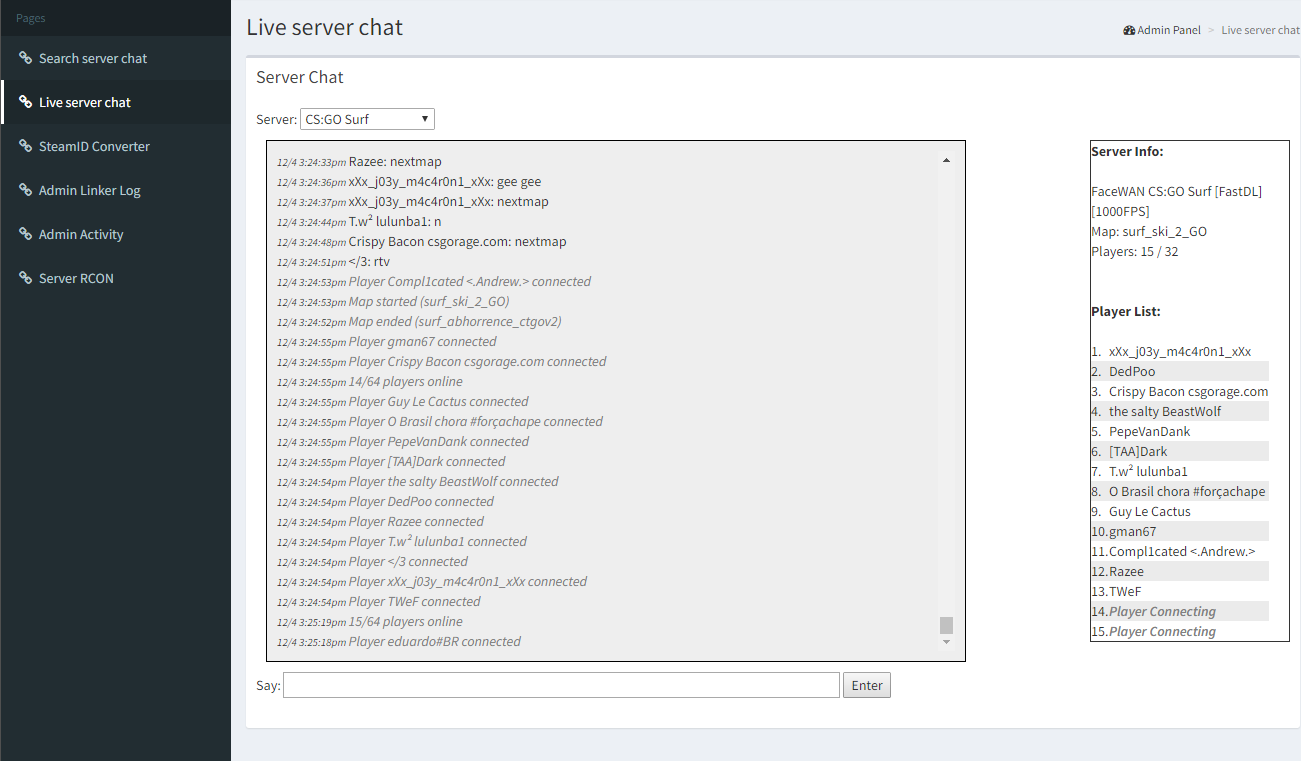 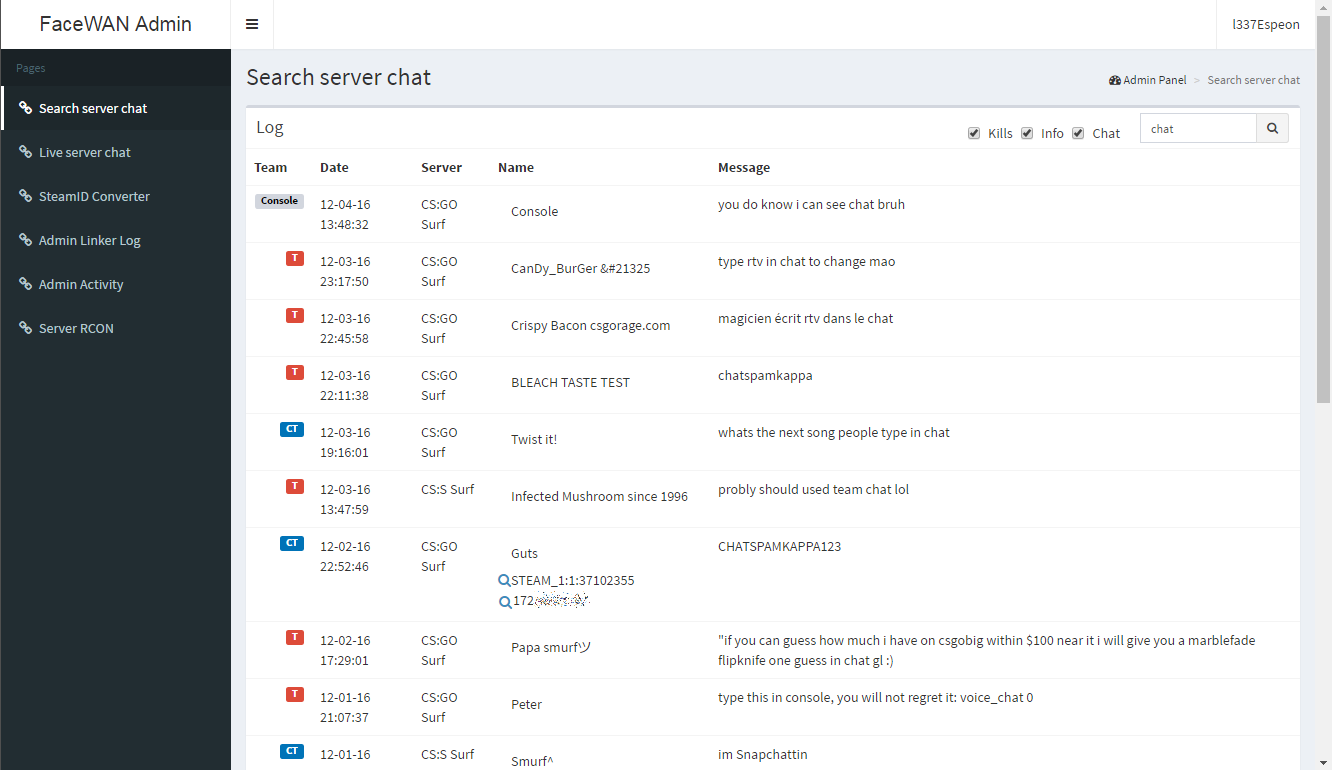 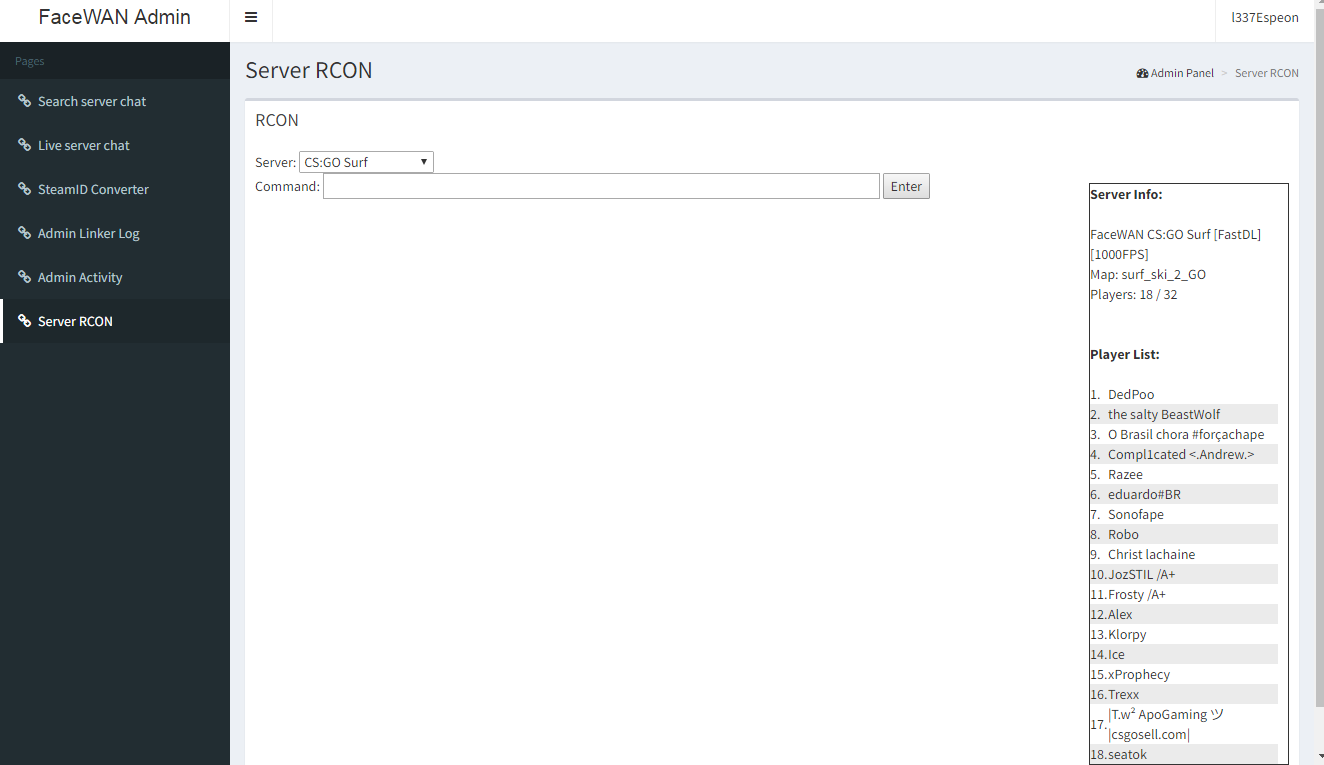 For those that haven't heard the news:

FaceWAN now has a CS:GO Skill Surf server up for those who like skill maps and fancy ranks/timers! The server has autobhop and runs maps of all tiers with timer and replay bot. If you have any ideas to add to the server such as plugins or maps, post below!

For a few months, FaceWAN has been testing out a Discord server, and we have finally finished setting up all the permissions! The server is now open to the public and you can join by going here: http://facewan.com/chat

For those that don't know what Discord is, it aims at replacing Skype, Teamspeak, Mumble, Ventrillo and offers the ability to join the chat from a web browser as well as the Desktop client and mobile apps! (More info at https://discordapp.com/)

There will be an event tomorrow at 12:00 PM EST. It will be a Dust 2 and will be running standard competitive rules with overtime enabled, as usual. If you wish to sign up, please make sure that you will absolutely be able to actually participate in the event and proceed to the signup discussion. As always, Teamspeak is required, but a microphone is not.

This might be rescheduled to a different day if we do not have enough people signing up.

I figured I might as well use this since this section rarely gets used for anything anyways.

I'm starting up another event to get this group going again. This time it's just a simple competitive match on de_mirage. This event will happen at 1:00 PM EST(time will be converted to your time zone when you view the actual event.

Anyways, there isn't really anything special about this specific event. Rules are the same as usual: standard competitive with overtime enabled. Teamspeak is required as that is where team communication will take place. A microphone is not required though, but is HIGHLY recommended for your sake and the sake of your teammates.